So when we moved in there was a massive stone trough outside the kitchen door which was overgrown with a stone pillar either side. It will eventually have to move as it is where our new kitchen will end up, but for now I wanted to tidy it up a bit as it is one of the first impressions which people get when they visit us. So a few weeks ago I emptied it of the existing soil, broken pottery and weeds, I even managed to save a couple of the bulbs to replant elsewhere. Once the trough was cleared out I refilled it with a base of gravel (for drainage) and then topped it with a mixture of compost and grit. Then I watered it well allowing a good couple of hours for the water to absorb fully. I used some free herb seeds in my trough and have planted chives, dill and coriander. I’ve also left a gap for planting some basil once the weather is a bit nicer. Where the trough is it doesn’t get amazing sun but it hopefully will have enough for my seeds to survive. I have tried to grow herbs (or should I say keep herbs alive) before but with varying success, usually down to my forgetting to water them. However, I do keep persisting as I relish the idea of adding freshly picked herbs to my cooking. The first few seeds have sprouted and are looking good so far. 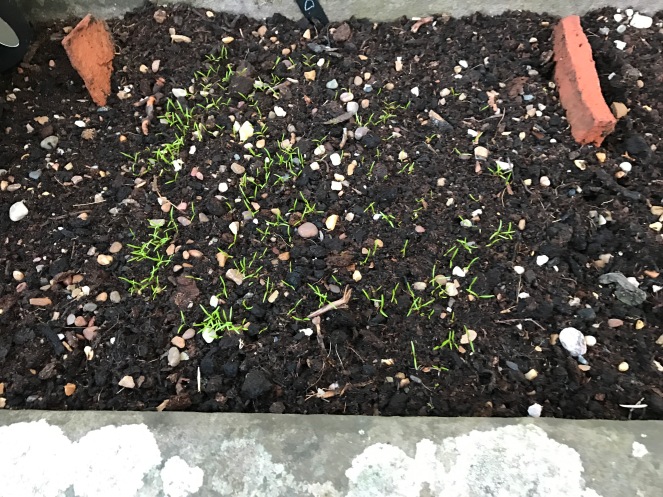