So yesterday our builder commenced some large scale outside works. We need to run electric, water and coms to several parts of the garden and this is being done using trenches. We are also having three concrete slabs laid; for my cabin, for the sheds to stand on and as a hard standing area for our caravan to be stored on. Added to that we are having patios laid for the greenhouse and for the barbecue area. We also are having some lighting and electricity points installed near the barbecue area so that we don’t have to wander down the drive in the dark and so we can have electric heaters out in the evening. The drive is also getting done, although I’m not exactly sure what the final plan was for that but anything will be better than how it was this winter. I’ve very much let J take the lead in these major outside works, partly as he knows exactly what he wants to achieve out there (I mainly make demands for what I want to be able to do and it is his job to work out the logistics) and partly as he is vaguely familiar with this process from his job and so should know what he’s talking about. It’s going to be a major disruption for the three or so weeks that it’s being done but after that we should have an outside area which really works for our family. We’ll still have to get the sheds, cabin and greenhouse but that should be a relatively easy thing to do once we have some money gathered together.

This is where we were at the end of day one. A massive trench dug down the side of the house and a new cover for the septic tank as the old one had rusted so that only half of the opening was covered and just had a fold down table covering it.  Not exactly what you want when you have a toddler running around. Oh and skip number one is about half full so far, I’m guessing we will go through about 5 skips at least before the work is done. 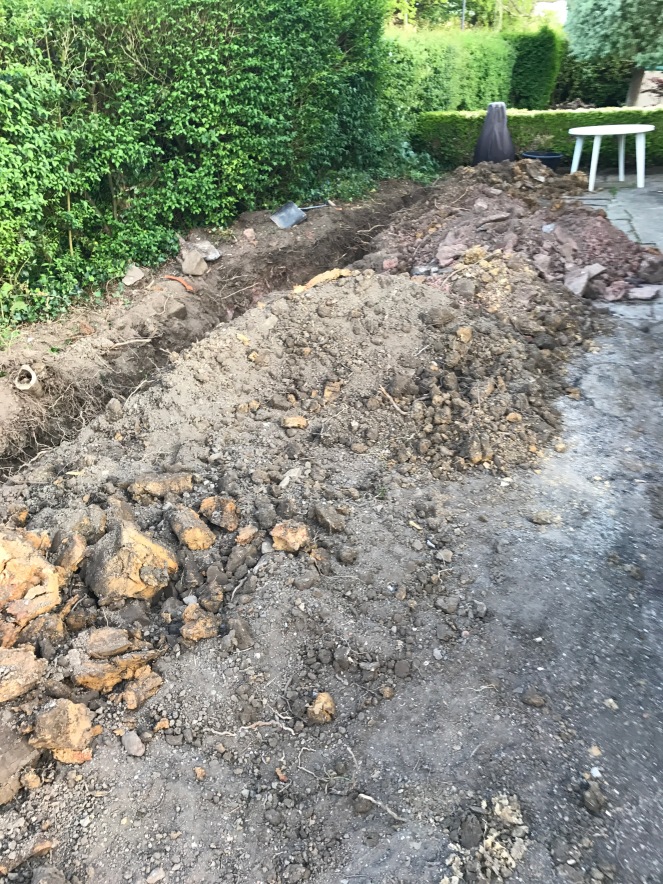