So carrots this year for us were very much a ‘let’s just chuck some seeds in this empty space and see what happens’ kind of thing. I had some free seeds from a magazine and a bit of a gap from where some of our beetroot seeds hadn’t taken so C and I just threw some in to see what happened. When C is sowing seeds they tend to be rather unevenly sown, try explaining ‘sow thinly’ to a toddler! I wasn’t really expecting any of them to come to much, it was more a bit of fun for C. We have since sown a few carrots into a pot by the side of the house, and a last few into the raised bed. It’s been quite exciting watching the tops emerge and thrive but of course you don’t really get an idea of what the soil is hiding. ﻿ 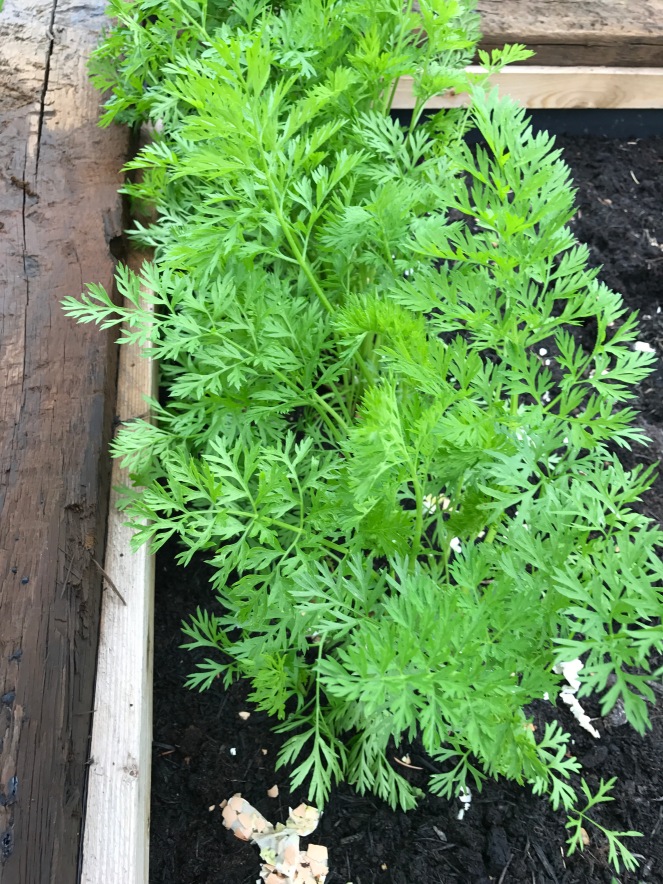 One of the biggest pest risks to carrots is carrot fly. They are attracted to the scent of the carrots apparently (I never really smell carrots but apparently they have a scent which attracts the bugs). So it’s best to try and avoid disturbing the soil until you are pulling them up. When I was pulling them up though I was surprised that there really was a carrot smell. As they were so closely sown (and as I did no thinning whatsoever) there are some very interestingly shaped ones where they haven’t had enough space to really grow, but I still am very proud. I think we’ll just give them a clean and then cook them whole, unpeeled or maybe try them raw with some hummus. ﻿

I think it will be a few more weeks until we can start harvesting our next batch but I think I would definitely plant a few more carrots next year. I don’t think we would ever manage to grow enough to be self sufficient in them (we do go through a lot) but we could certainly have a few little tasters during the year. Not bad for a packet of free seeds really (Grow your own magazine, Autumn King 2 variety for anyone who’s interested) and we still have plenty of seeds left for next year.

Now I know that in the days of modern technology we can find out so much about of gardens from the Internet, but there is just something nice about a gardening magazine. Both J and I subscribe to different magazines, although I am by far the more avid reader of them (J had meant to cancel his subscription but forgot so it auto renewed). J has Gardeners’ World as he is a huge fan of the show (we both are actually, it is our secret Friday night pleasure) and his garden interest of choice is more flowers and general garden design. I, however, am more excited about growing fruit and vegetables as I like the idea of knowing where our food comes from and I feel our garden should be useful as well as aesthetically pleasing. So I subscribe to Grow Your Own magazine. I have to say the thrill when it arrives every month means that whatever evening plans I have generally go out the window so I can sit in my chair in the lounge and give it at least a good skim read.

Whilst I could go onto google and find out most of the information in the magazine, sometimes you don’t know what you need to know until you read it. An added bonus is the free seeds you tend to get most months. Whilst I have generally got a good idea of what I want to plant having some different free seeds means I can end up trying out new things I wouldn’t normally have done. It also means if something fails then I feel less annoyed than if I’d bought the seeds. And sometimes you get a nice surprise of a new variety which you end up falling in love with. There’s also something nice about having a hobby magazine with all the latest products and ideas and reviews in. Most of my friends have at best a passing interest in gardening and none have the eagerness that myself and J have. And although a monthly gardening magazine tends to cost more than the weekly gossip magazines that many of my peers seem to devour it seems so much better value as I continually refer back to them.