I’m not going to lie the past six months have been tough, really tough. Living in a caravan over winter has not been fun. I’ll do an update at some point on what’s been going on the past few months but first let me introduce you to our latest additions. 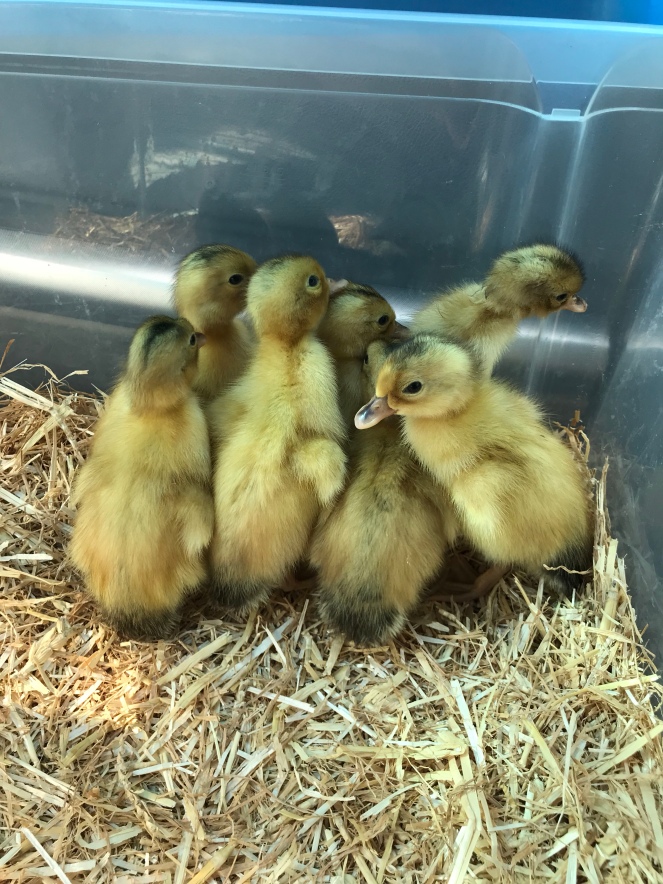 Yesterday, J and I were undertaking the rather arduous, and somewhat late, task of planting our seed potatoes in our newly dug bed when I began discussing where we might have our ducks and fruit cages. J has been desperate to get ducks for quite a while and we’d been putting it off as firstly, we’re quite busy and secondly we’ve struggled to locate a drake. Ultimately we plan to breed our ducks and use them for meat so we will need both males and females in the correct ratios. Anyway yesterday we decided to give our local poultry breeder a call to see what she had in stock and she had just hatched seven ducklings of one of a suitable breed. She was going to call us back once she had sexed them (not the easiest things to do with ducklings unless you are a professional). We decided to go and see them later that day and before we knew it she had called back to say there were two male and five female. It kind of seemed like fate to have almost perfect ratios so we just jumped in the car, with C of of course, and headed straight there. And yes, you’ve guessed it, we bought them all. 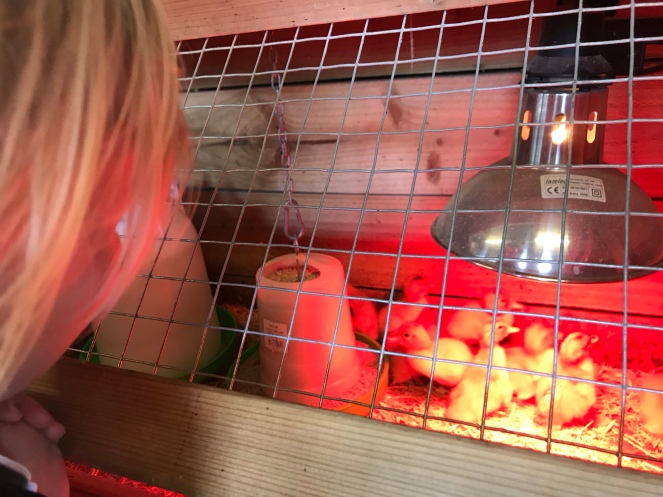 The breed is called Silver Appleyard and they are good layers, about 180 eggs a year each, and grow to a good size for meat. So we’ve been spending the past day getting to know them. Finding out what on earth to do with day old ducklings has involved lots of internet searching but we think we’ve got a handle on the basics. They’ll stay inside in their brooder (large box with a heat lamp) for about three weeks and then slowly be introduced to their new home outside. Which we don’t have yet. But for now it’s basically making sure that they have food and water and keep warm. One of our boys is weaker than the others and we’ve had to give him special attention by hand feeding him. We’ll update on him soon if he makes it through the night. The others had their first bath today. They loved it but we only kept them in for a short while as they don’t have the oil needed for waterproofing themselves. We’ll try to let them have a little swim every day if possible.

So back in winter we had some problems with our septic tank. A septic tank that is the appropriate size for the property (which ours is) should need emptying once a year. Ours was emptied over the summer and it needed doing again before Christmas, a bit early but then it had been raining a lot so we didn’t think too much of it. But then it needed doing again a month later which sent alarm bells ringing. Now as I think I’ve explained before our septic tank had a soak-away attached. A soak-away is basically a big pit of gravel where the waste water drains into and it then trickles down the gravel and disperses into the ground. However, a soak-away can fail if it anything other than liquid gets into it. The liquid will then fail to drain and the septic tank will become backed up and filled with water. This is what had happened with our system. A soak-away is not a perfect system and most end up failing at some point. In fact nowadays they aren’t installed anymore and instead you require a sewage treatment plant instead. This will filter the waste water before draining it into a ditch. As our soak-away was failing we took the plunge back in spring and had a sewage treatment plant installed. Unfortunately this coincided with my being home with tonsillitis for the first part of the week and having a digger digging up your garden to lay new piping is not exactly conducive to resting. In order to install the new plant they had to dig up and remove our old septic tank, install the new sewage treatment plant and then dig up and place pipes to run the treated clean water into a ditch.

A right pain in the backside to have done but it does now mean that we’re set up and shouldn’t need anything doing to it for the next 25 or so years at least now. Ours is one of the smallest tanks available as there are only three of us in our house but I was still surprised by how large it was. 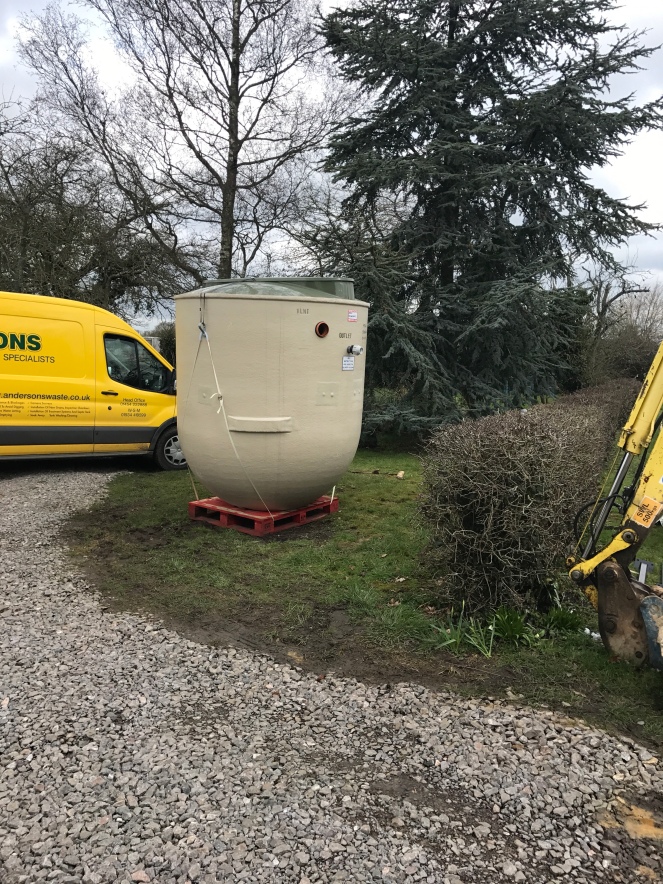 It did result in a huge number of diggers and crane type vehicles at our house which delighted C but most people aren’t really that interested in septic tanks and now it’s installed and working neither am I really. But in case you are here are some photos from during and after the work. 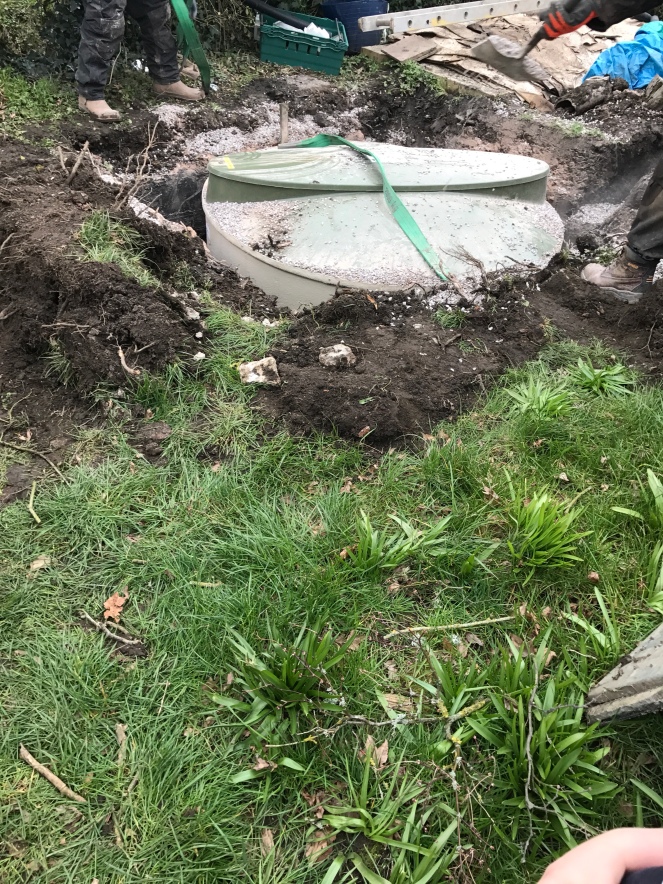 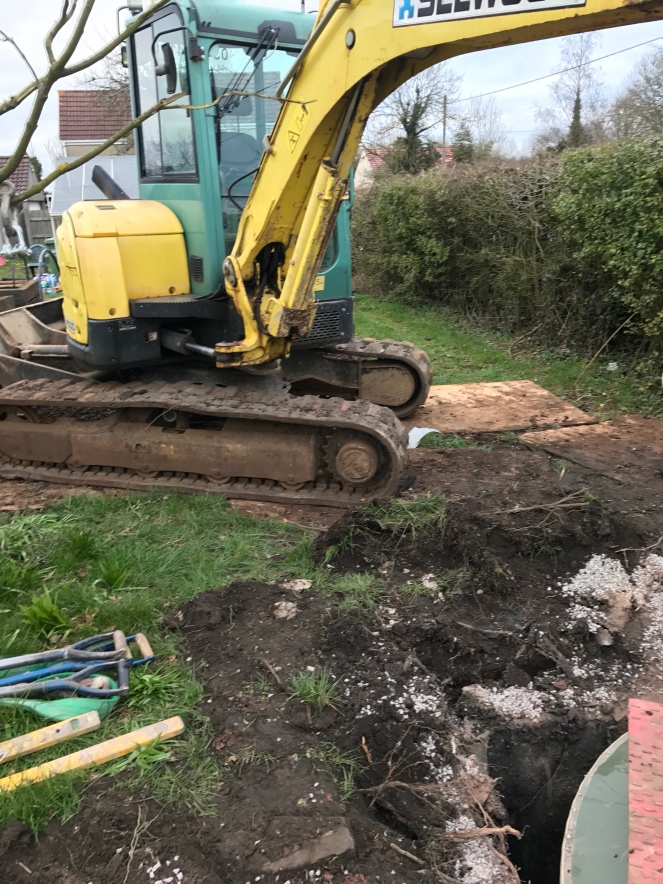 One thing which did really impress me was how well the guys cleared up. They had had to move some of the bark area edgings in order to get the digger around as they had to manoeuvre around a forty-odd year old Acer tree. They removed them carefully and placed boards down to protect the ground and then replaced them carefully and relaid some grass seed where the ground had turned into mud around the tank. Now you wouldn’t really know that the tank was there as it blends in fairly well, all you hear is the occasional noise where the electric motor (goodness only knows what that does but it keeps it all ticking away nicely) is activated.

There is nothing worse than walking down the street and having a stranger’s dog bark at you, or growl, or bound up towards you and ignore pleas from their owner. Especially if you have young children or are nervous around dogs. We have been lucky that C has encountered some friendly dogs so far but we know friends who have had bad experiences which have made their children very nervous around animals. We think it’s part of being a responsible dog owner to have control of your dog when out in public. Not only that but we want to be confident that our toddler, and others who we spend time with, are safe around our puppy. A dog needs a recognised pack leader and, as J was the driving force behind having a dog, he is going to be in charge. So, therefore, he needs to be the person doing the training. As usual, he did extensive research and asked around to find the best local trainer and we ended up going for one recommended by numerous sources. Last week, when Jessie was just 9 weeks old she went for an assessment/introductory session. For anyone who hasn’t already met her, this is Jessie.

She’s a golden Labrador retriever and has a lovely temperament. Labradors are known for their intelligence and ease to train (one of the reasons why we wanted to get one). The trainer we went to said she would be easy to train and seems very amenable (but she probably says that to everyone). She will do a four week course (the first four Saturdays in September I think, once she has had all her vaccinations) and then after that she should have all the basics grasped. We will of course have to keep up with the training at home, even puppies have homework. The trainer already showed us some stratgies to start at home which I’ll go into more below. We’re also looking at doing gun dog training with her in case J ever wants to shoot with her (it will also mean she is super trained).

So some of the key suggestions for training:

I hope this is useful to someone, once Jessie has started her proper puppy classes, I’ll do a more comprehensive training post.

So for the past week C and I have been up north visiting family and friends. We’ve mainly been based in the family caravan in Bamburgh and we’ve kept ourselves busy seeing some of the great places that the North East has to offer. I’ve loved spending quality time with my daughter away from the hubbub of everyday life where we can focus on having a good time and forget about chores. But do you know what? I’ve really missed home. J has still been at home and working during the week and when we’ve caught up via phone or text I’ve been bombarding him with questions about the chickens and the veg and what’s been happening. I should point out here that of course C and I have also missed J but given that he used to work away all week we’re quite good in some respects at being apart for short periods. It has been nice to put C to bed at 7 and then just chill for the rest of the evening. No watering or feeding chickens or weeding or washing or clearing up to do. Being able to put my feet up (I’ve massively missed having a sofa so it’s lovely to have one this week) and just watch TV and mess about on my iPad is lovely. But do you know what? If I was doing this everyday I do think I’d get bored. There has been no sense of achievement and seeing something which I’ve worked hard on being completed. And let’s face it there is a lot of rubbish on TV. If I was watching TV normally of an evening I’d also be doing a bit of knitting or something creative but in the rush to leave I forgot to pack the cardigan I’m working on for C. But in a way that’s been nice. A bit of time out has reinforced that I love our life and really want to keep on living it with my little family. I can’t wait to get back to it and J. ﻿﻿ 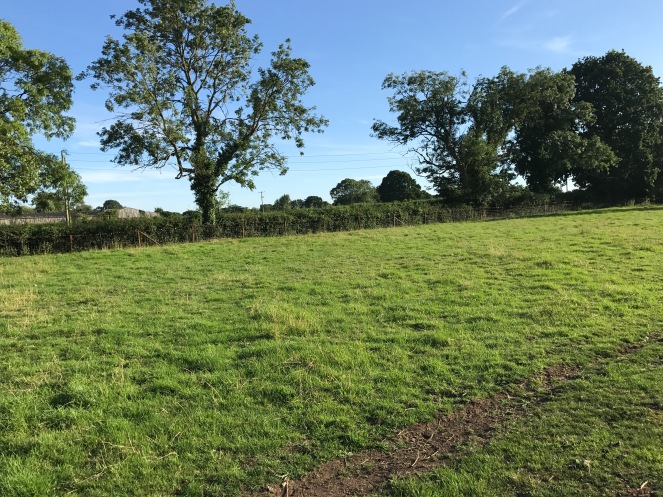