Now some of you may remember that last year we had a great disappointment as we managed to grow only one blueberry from our three plants. This year, however, things couldn’t have been more different. Our blueberry plants are in pots as blueberries tend to prefer acidic soil and for where we live we can best provide for them in pots than in the ground. Now the blueberries have been fairly neglected this year as they were moved about to make way for some of the house works and I was very grumpy at their lack of productivity this year so basically just ignored them. However, when I moved all our pots over to the greenhouse (in about April time) they looked a lot more bushy than I remembered and seemed to hold promise for more blueberries this year. 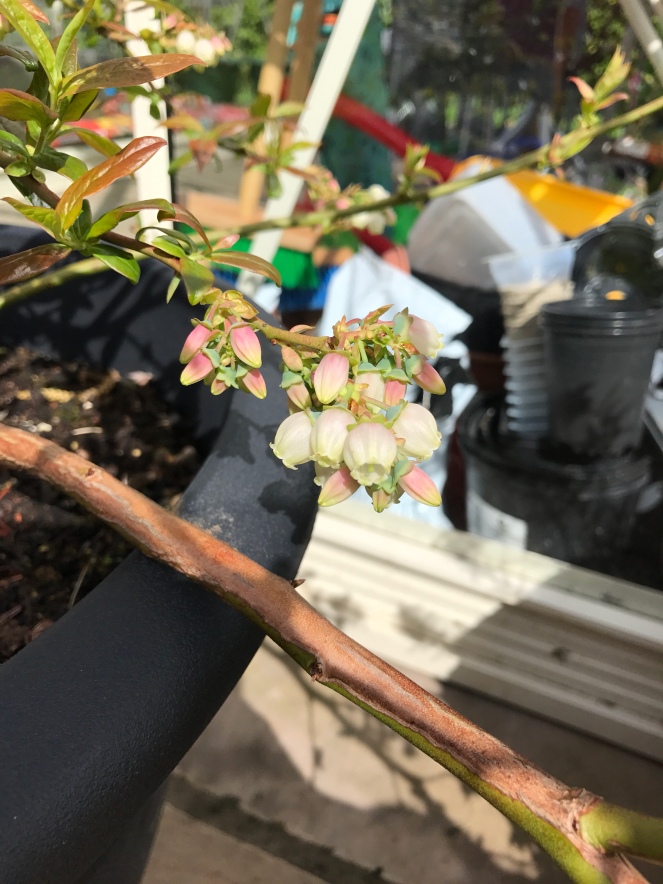 The blueberry flowers themselves actually looked rather beautiful and were in abundance on two out of the three bushes. The third one did have some but not as many at all and in general it’s foliage was much less healthy looking. It all looked rather promising as the tiny green blueberries emerged from the remnants of the flowers and slowly (much more slowly than I would have anticipated) began to grow.

Now I don’t really know how blueberry plants are supposed to look when they grow but ours have just become rather wide. You’re not supposed to prune them for the first couple of years (I think) although I imagine I should have probably done something to support them. However, once the delicate fruit had begun to emerge there was no way that I was going to to try and wield their branches about. The only problem was how to net them from the birds. Birds will not take the fruit until it is ripe but then will strip it of ripe fruit at every opportunity. So I decided to take the rather lazy step of just moving our pots inside the greenhouse when the first fruits were nearing ripeness to keep them safe from being stolen. This did mean that the greenhouse became even more crowded than normal for a couple of months (turns out blueberries take ages to get ripe and stay looking almost ripe for quite a while) but it was worth it.

Once they began ripening there was no stopping them and we were picking huge amounts every day.

It has been a bit of a battle to stop C from eating them all straight away. Not that I blame her mind you as they are so sweet. They were a great snack for C and I really enjoyed having them in my yogurt for breakfast. I even managed to sneak away enough to freeze a kilogram or so to use in the future for baking or smoothies. They’re finished for the year now so have moved back out of the greenhouse which has given us a bit more breathing room there and hopefully they’ll continue to give us more amazing fruit for years to come.

Yes, you are reading that title correctly. We have three blueberry plants which between them have produced the sum total of one blueberry. One solitary blueberry. Not exactly going to make a meal.﻿ 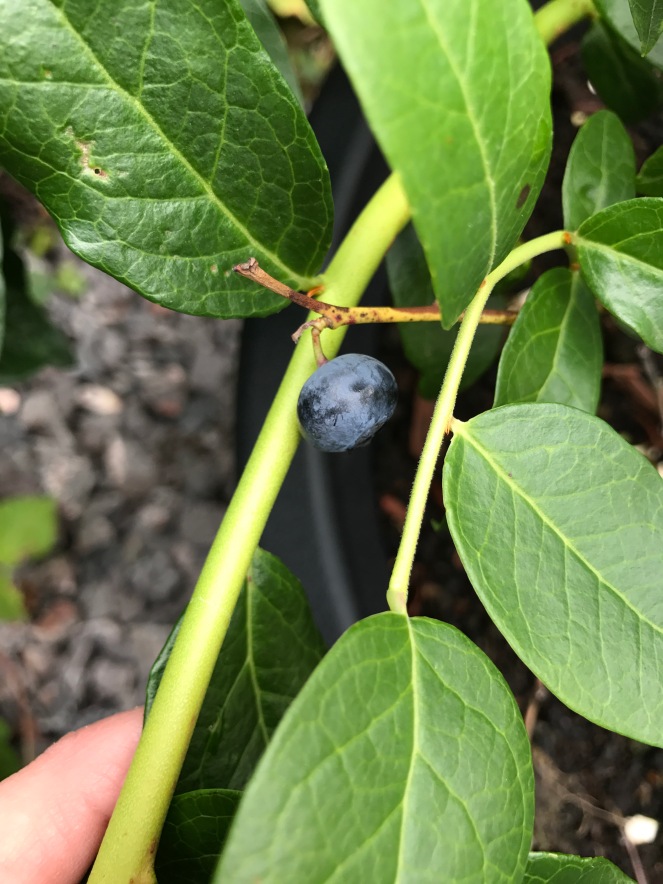 I mean granted it was very beautifully formed. I let C pick it (they are her favourite fruit) but even she was disappointed with it’s lack of companions; “I like more blueberries”. Well tough luck for this year I’m afraid. I’m hoping that it is because it’s their first year in proper soil (blueberries need acidic soil) that we have a lack of fruit as the foliage has been really flourishing. We’ve been taking care to water them in rainwater to maintain the PH balance too. I’m not sure what else to do to increase productivity? 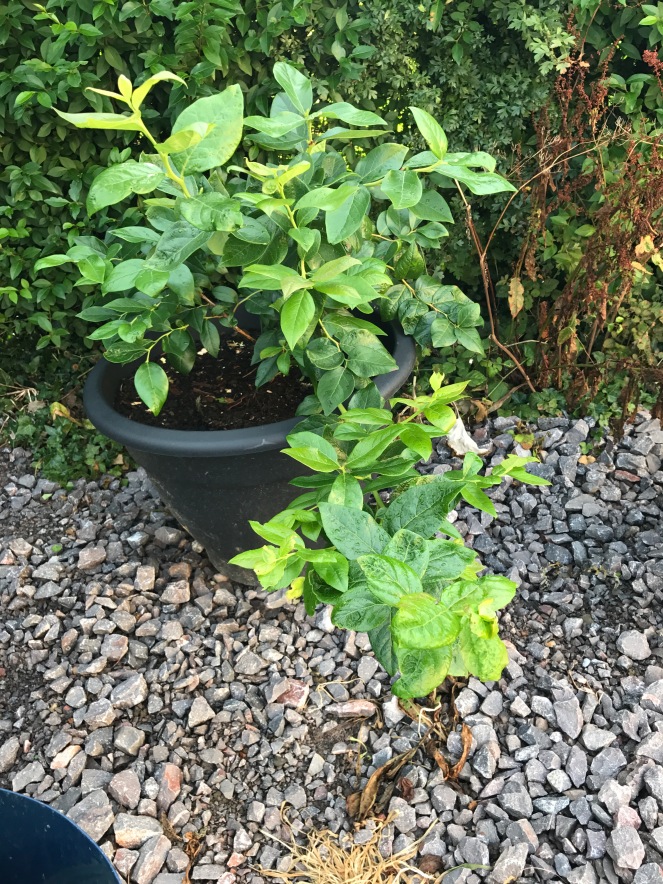 The raspberries have started to show their first fruits which means we need to start protecting them from the birds. The last thing we want is all our hard work on them to become bird feed. 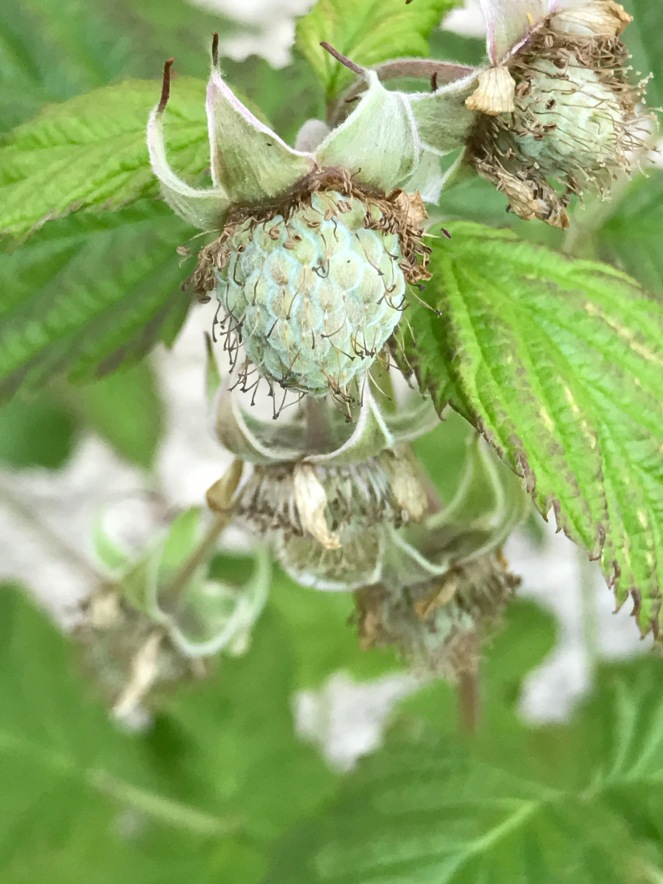 So our raspberries are in pots and as such do not need the support of canes so there is not a natural point for us to attach our netting to. So last week at the garden centre we purchased some bamboo canes and they are now sitting in the pots with netting covering them. The netting has a large enough mesh to ensure that bees can still pass through it but impossible for birds to get through. That is the major downside of soft fruits, the birds love them and netting can be a hassle and tends to look fairly unsightly. However, as it is only for a short period of time when the plant is fruiting it seems a small sacrifice for what will hopefully be a good crop of fruit. The blueberries don’t seem to be at the point of fruiting quite yet, and are likely to take at least another year to really get going but they will need protection too.