So today we have had Jessie home for a week. Although we would have considered ourselves prepared (I had a family dog growing up, we’d thought about puppy proofing﻿﻿ and had bought all our supplies, we’d even read a book), we weren’t. Well we were as prepared as we could have been but nothing can really prepare you for how much your life will change. Same as having children really. We have been really lucky as Jessie has a lovely nature and has settled really well with being away from her mum and six siblings. We’ve also been lucky that C and her have bonded well and C has embraced having her join our household. J and I have been keen that Jessie has to fit in with our lifestyle and whilst we are willing to make concessions as she settles in, ultimately she will have to muck in with the rest of us. However, for this first week we have spent time working out Jessie’s needs and routine and seeing how it will fit in with our lives. So this is where we’re at with our now nine week old puppy’s routine.

J gets up at 6 and cleans out the cage, as required, and gives Jessie her breakfast. He then takes her for a couple of laps around the field, he’s currently at one with the lead so she learns how to walk well on it and one without with her walking next to him. She also normally manages her morning toileting during this, both varieties. I get up at around 7 and make us both a morning latte. Then it varies depending on what time J needs to leave the house and what time C wakes up (anytime between 7 and 8:30). We are trying to focus on several things at the moment with Jessie as part of her training/learning process. We are trying not to leave her unattended when awake (so we can stop chewing or poor behaviour immediately), if she is asleep on the floor I keep myself nearby (although I do pop to the kitchen/dining room/bathroom as required) in case she wakes up. This has provided some restrictions in what myself and C can get done but we’ve adapted alright so far. When she is awake C and I try to play with her both inside and out (when the weather has been nice enough) and have encouraged her to explore within reason. When C and I are having breakfast, or in fact when any of us are eating, then we are insisting that she is in her crate. For now we are locking the door but we’re hoping as she ages it will become a habit for her to go there when we go to the table. Why are we doing this? Well, both J and I don’t like dogs begging at the table and so want to try and make sure she leaves us alone when we eat. At first she would object when we put her in there but now she is increasingly going in there willingly and is calm and happy there. She now often goes in there herself for naps. Though sometimes just stretching out on the floor is best.

Co-ordinating lunchtimes has been tricky as both she and C normally eat at 12, so I’ve tended to give Jessie her lunch first and then take her outside for her toilet stop and then give C her lunch afterwards. Speaking of toilet training, I’d really hoped that that particular phase of my life was over now. There seem to be mixed opinions about the best way to house train a dog. As seems to be the case with children, everyone has an opinion on what you should do. Some say use puppy pads, some say don’t; some say go down to them at night, some say never go down; some say let them out every two hours in the night, some say don’t. We’ve gone with what is going to work best for our life at the moment. That is having a puppy pad in her crate which she can use at night or when she’s shut in there. Then we let her outside at several points in the day; as soon as she’s let out of her crate (morning and anytime she’s been in there during the day), straight after meals, when she wakes up and when she’s had a big drink. That sounds like a lot but it isn’t really, she does sleep a lot and she’s getting pretty efficient at going as required. We’re also using a key word (toilet) whenever she does anything so she realises what we want her to do when we say it (in theory). We are having the occasional accident but that’s really only been when C has had to take priority. ﻿﻿

There have been lots of attempts at chewing so we’ve had to be firm with her. We’ve also had some distractions which have proven a godsend. My current favourite is her Kong, which, thanks to a tip from a friend, I have been filling with cream cheese and then freezing. It’s great for when she’s in a mood to chew and her teeth are getting to her. She absolutely loves it. 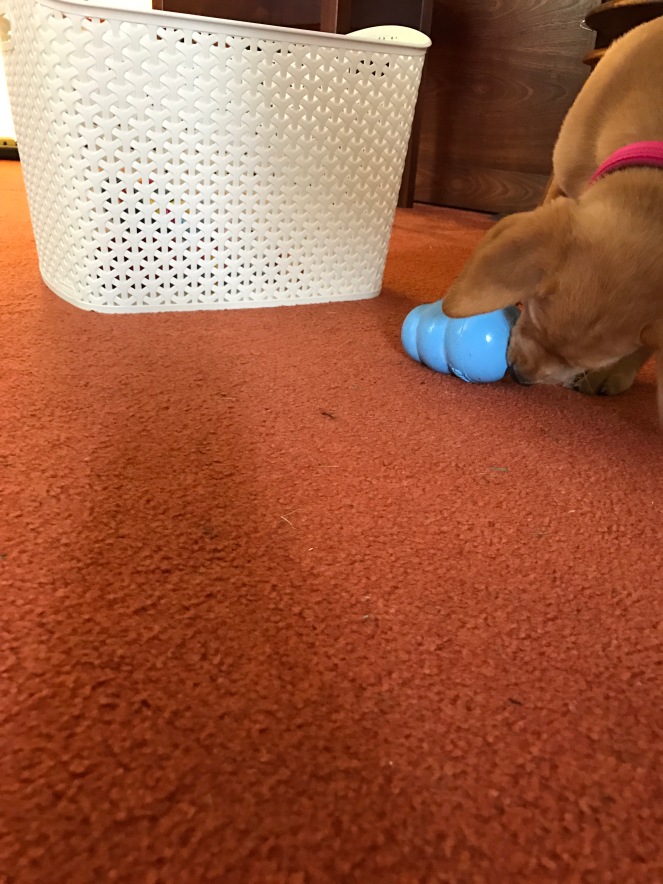 So although it has been a tough week and very trying at times, Jessie is settling in well and I keep thinking that it will only get better in time as she gets older. At least I hope it will. C has been brilliant with her considering how much her life has been upturned, I’ve been really proud of her. We’ve had to find different ways to play at times to avoid lots of tempting toys on the floor but it has been a rather fun adventure.

C has been toilet training since February (ish) but does still need prompting, especially if there are lots of distractions. Now I’ve been prepared for a regression for C whilst trying to housetrain Jessie﻿ and even a bit more of her wanting to go to the toilet outside. What I was not prepared for was the hilarity of today. I was trying to persuade C to go to the toilet after I realised she hadn’t gone since we had an emergency poo stop this morning whilst fabric shopping (again a phrase I never thought would be in my vocabulary pre-baby). The only way I could persuade her to go was to say she needed to show Jessie what she was doing. Cue the situation with C on the toilet, me on the floor talking to her and Jessie exploring with us. Jessie tried to lick C’s legs which caused hysterical laughing and her trying to pull her legs up, which caused Jessie to get very excitable and try to run behind the toilet. Which caused C to giggle more. And Jessie to try to run round more. And so on. There are many moments in my life when I think what the hell am I doing. If you had told me 10 years ago if I would have been happy sitting on a toilet floor with a dog running round me trying to persuade a toddler to go to the toilet then I would have thought you were crazy. But then I guess time can change what you know as happiness. At the moment there’s nothing which makes me happier than spending time with these two lunatics (and J of course).﻿﻿

So Jessie went into her crate and went to sleep herself last night whilst J and I were watching TV. We took advantage of that and after J took her outside for a wee, we shut her in and went up to bed. She didn’t cry out and seemed to have settled nicely. Now before we got Jessie, J and I agreed (or more rather I insisted) that any night disturbances were up to him. This was for many reasons; firstly, as J was the one who was so desperate for a dog; secondly, as I sleep with earplugs as I’m a light sleeper; and finally, because I did all the night shifts with C (to be fair to him, that was because she was breastfed and give him his due he did help with middle of the night poos if required). We’d been advised by the breeder not to go down to her in the night. She’s not been attended to in the night for a bit now with the litter and won’t need feeding in the night so she should be fine. Well, she’s understandably going to be a bit lonely in the night as she’s used to having her mum and fellow pups there, but she doesn’t need anything else.

Now according to J, Jessie woke up at 5:24am and cried for a bit, C also woke up and started to sing back at Jessie. They all dropped back off and when J got up at 7 there was a fair bit of mess in the cage. She had her breakfast and by the time C and I got up at about 7:40, J was still waiting outside for her to do her business. Today has mainly been spent constantly trying to predict when she needs the toilet and rushing outside with her. She was introduced to her first other dog (that is fine at the age as long as you’re sure the other dog has been vaccinated) and she played really nicely, if rather excitedly.

We’re following Kennel Club guidelines about introducing her to as many different types of people/animals/situations whilst she is still young. 16 weeks is considered by most as the cut off time when her big learning and developmental phase will have passed. This is referred to in most of the literature as socialisation. From our point of view, we want Jessie to be a family dog who is comfortable around people and animals and not only fits in with, but enhances our current lifestyle. This afternoon we have some more friends visiting and I’m hopefully going to get some more of our friends, with their toddlers, round next week as I think early introductions will benefit them all. First up though, J has just taken her to the vet for her vaccinations so C and I are going to take advantage and get the Duplo out.