Sewing has increasingly become something which I spend my spare time doing. Something which I enjoy and something which I am, with practice, improving at. Now I would certainly not consider myself an expert by any stretch of the imagination but I am getting to be more knowledgeable and more skilled as time goes on. I’ve made numerous items recently, many of which I haven’t photographed but some of which I have so I thought I would share some of my favourites. 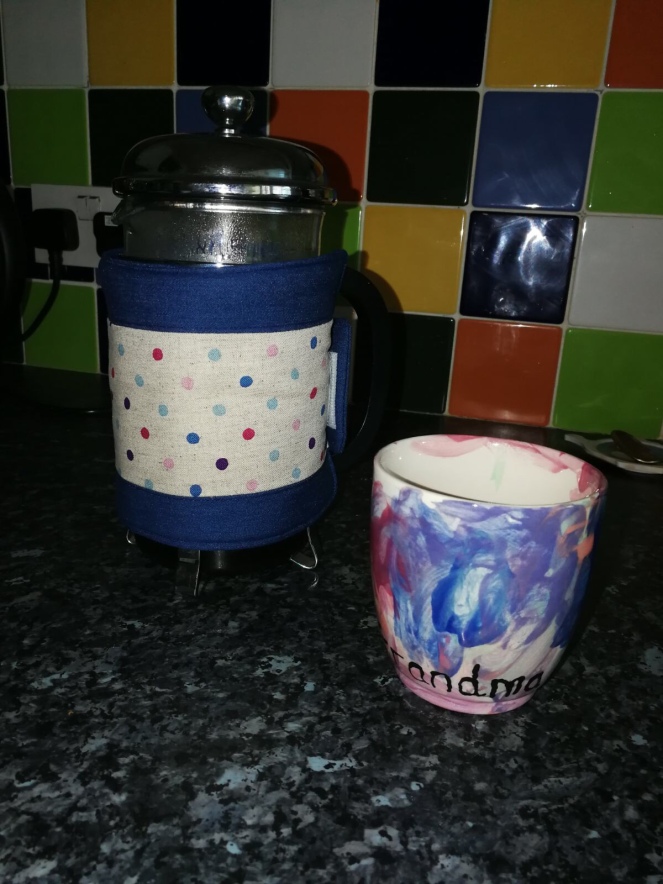 This was a Mother’s Day gift for my mum (obviously). My mum tends to only have coffee once a day and uses her French Press. C painted the mug and I created the cafetière cosy. It was made using a free pattern from a magazine, I forget which now, and was my first make using heat insulating wadding. It was a slightly snug fit and I know myself that the stitching wasn’t as straight as it should have been but it suits its purpose well. 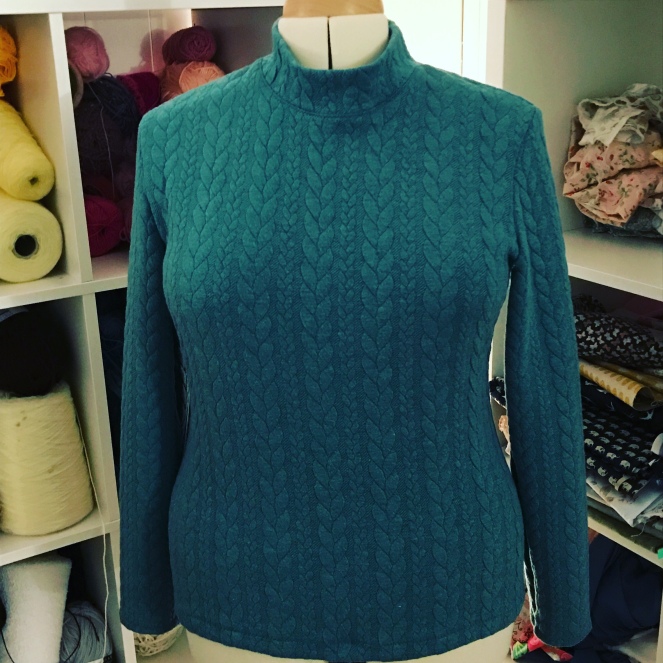 Next up is a top I made for myself using Tilly and the Buttons new sewing book Stretch. I made it using some lovely cable fabric from my current favourite online fabric shop Higgs and Higgs. It was a straightforward make and I used both my overlocker and my regular sewing machine to get what I think is a fairly professional look. It’s construction is relatively simple and the pattern gives lots of guidance at every step which is useful for those of use not well versed in sewing terminology. I paid careful attention to ensure that the cable pattern lay straight and I’m really pleased with both the pattern and the material. I can see myself using both again.

Now I know it looks very crumpled in the picture and you can’t really see the top, but this is a party dress that I made for C. I actually made it at a local sewing class and have since made another using the same pattern. I actually made this back in October time and it was one of my first forays into sewing clothes. It has a lining inside the top and a pleated skirt and a zip at the back. I made it in pink dotty fabric as C is obsessed with pink (still) and she absolutely adores it. However much I iron it she always manages to look bedraggled within half an hour of putting it on, but that is just her! I actually made her the hooded cape as well back before I had my cabin and when I was more focused on knitting. This was her on Mother’s Day when we were on our way for one of my favourite treats, afternoon tea. 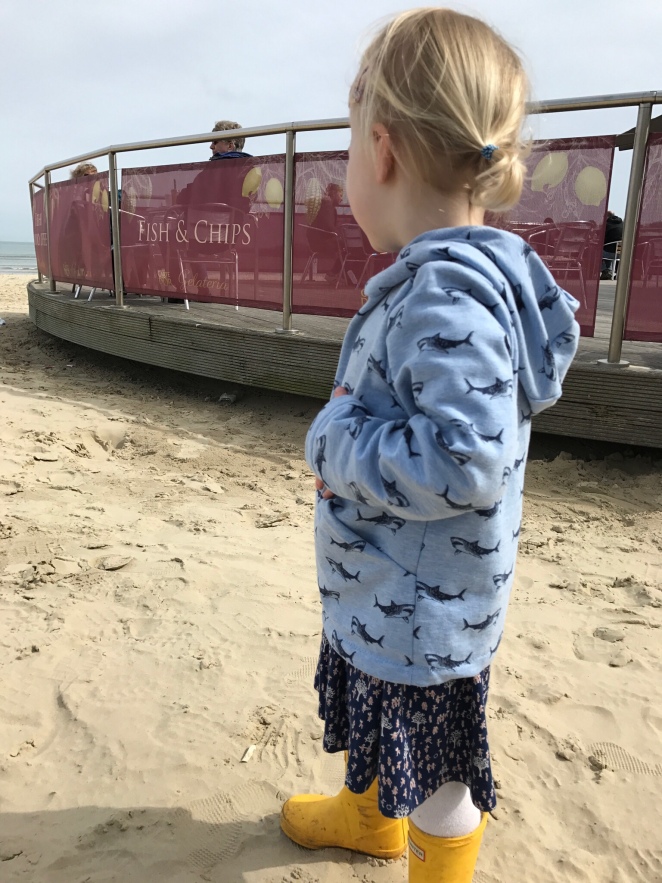 I’ve made a couple more bits for C too recently. One of which is a hoody made using a pattern by a company called two stitches. Now little C hates wearing any kind of warm clothing. She is constantly taking her coat off outside at nursery and I really struggle to get her to wear any kind of warm top. I’ve knitted her a couple of really beautiful cardigans in the past and she point blank refuses to wear them unless forced. So I saw this pattern and decided to have a go at making her one, with the logic that if she chose the fabric she might actually wear it. The first was a grey number with sparkly unicorns on (I promise it looks better than it sounds), she absolutely loved it and has actually worn it loads without any objections. And the second was the blue shark material above. Both times she picked out the material herself and though I was dubious I went along with it and I have to say I’m rather pleased with how they’ve turned out. Perfect for colder days at the beach.

So the cabin has had a few new additions since I last wrote about it. For my Christmas I received a mannequin so that I could get into dressmaking a bit more. It has proved to be a most valuable addition as my measurements usually don’t clearly fit into one particular size (in fact on one pattern my waist and bust were three sizes apart). 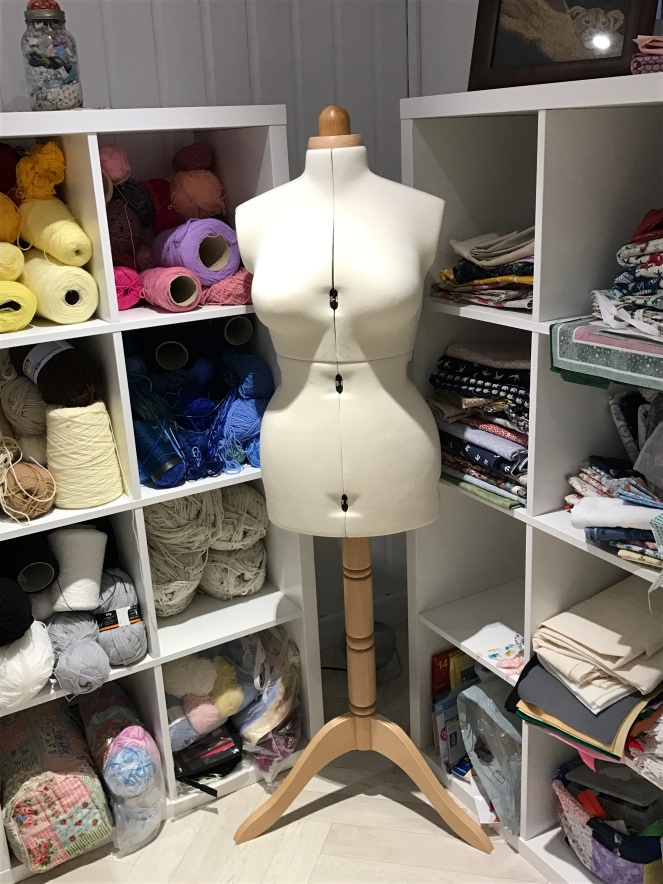 I’ve also purchased some lamps so that when I’m in the cabin on an evening the light is a bit softer, especially if I’m sitting in my chair reading. I looked around for ages to find three matching lamps that I was happy with. I wanted one tall lamp for behind my chair and a small ones for two of the other corners of the room. In the end I found what I was looking for in B and Q. 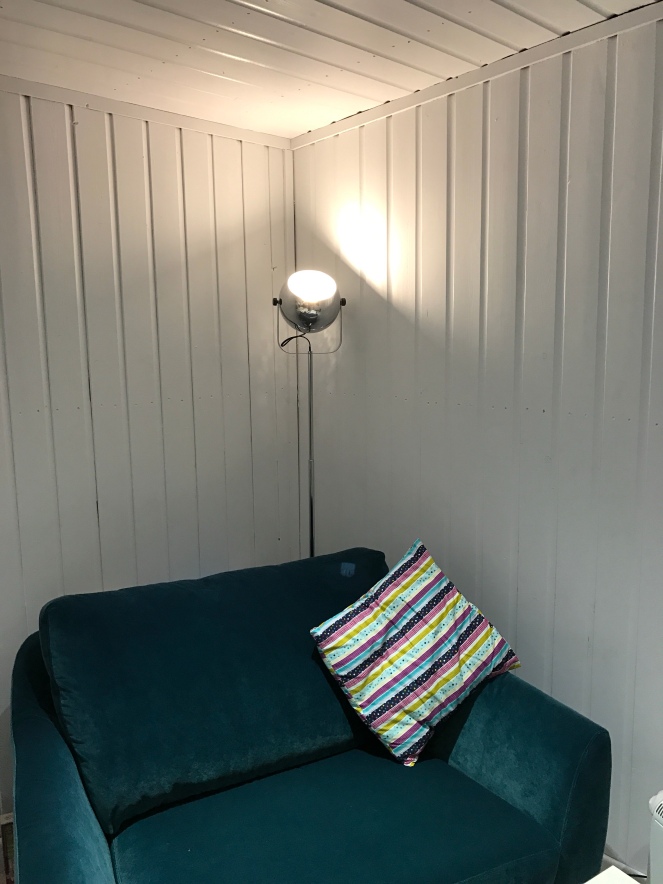 However, the most exciting new addition to the cabin is my overlocker. For a while now my husband has been asking me if I want a new sewing machine. My machine was a gift of sorts from a friend of my father-in-laws who didn’t really use it. It’s a good few years old now but it is such a good quality machine and it does everything I could possibly want from it so I see no reason to upgrade it. So instead of a new machine I asked for an overlocker. An overlocker is a great machine for giving your seams a professional finish and it also enables you to stitch with more stretchy material. I’ll probably do another post in the future about overlocker but for now here is a picture of my fabulous new addition. 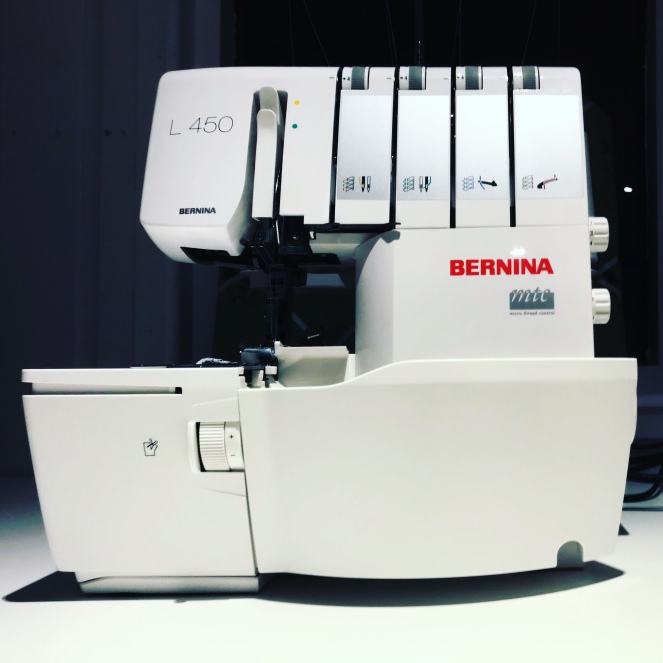 The rest of the cabin is pretty much as was. It is constantly in need of a tidy up, I mean if I have free time to sew then why would I want to spend it tidying? What I have found though is that we’re using it a lot more now as a family. If I go down to sew of an evening then J will often pop down for a cup of coffee and will sit it my chair chatting whilst I sew. I’ll often pop down there for an hour or so with C during the day as she has some toys kept down there as is always exciting for her to re-discover toys. C has become really fascinated with my sewing now, partially as I’ve made a few items for her recently which she loves so she’s really loved watching me create them. She’s also wanted to help several times. As any mum knows, toddler help is the least helpful kind of help. She’s “helped” me organise my fabrics, by pulling them onto the floor and using them as blankets for her and her toys. She has wanted to sew and has ended up sitting on my lap and guiding a piece of material through the machine using one of the fancy embroidery stitches. No doubt before long she’ll be wanting to make her own items which will come with it’s own challenges I’m sure. I’ll share soon some of my recent makes that I’m most proud of and some of my planned projects.