So during the Easter holidays we took our caravan down to Dorset for a midweek break. We didn’t take Jessie with us this time as she is in heat and it would have been a bit of a nightmare with her. The weather was forecast to be poor but we decided to embrace our inner campers and go for it anyway. Now my husband spent much of his youth in Dorset and so is really familiar with the area and since being with him I’ve fallen in love with the area as well. For our first trip with the caravan down there we decided to go for a holiday park called Highlands End which we’d visited before to use the facilities in our pre-caravan-owning stage. The nice thing about going on holiday in a touring caravan as opposed to another form of self-catering accommodation is that you can have everything unpacked and ready before you leave home. Before we set off I had already put our clothes in the drawers and wardrobe in the van. Our food was already in the fridge and freezer and C’s toys were already in her toy cupboard. This meant that when we arrived there was only the setting up of the actual caravan onto the pitch to do. 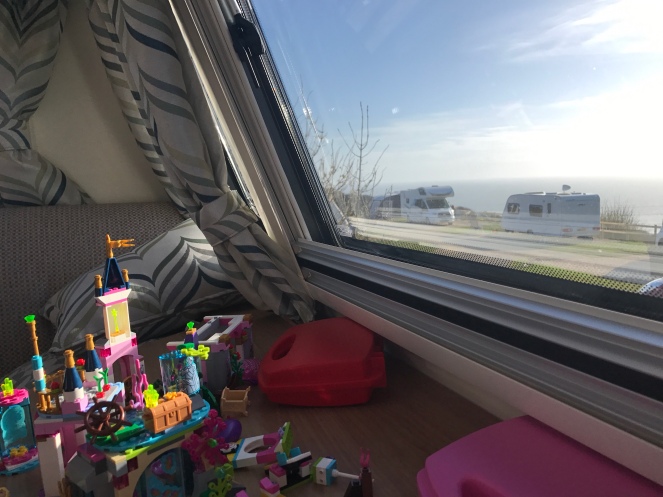 J is responsible for all the external sorting of the van and C and I do the inside. Although if I’m honest her assistance generally involves playing with her toys right in the middle of where I want to be. We are fairly efficient at setting up now to be honest and it’s lovely to arrive and feel your holiday can begin straight away. The weather whilst we were away was forecast to be rubbish rain all week so we had plans to visit the aquarium or go and see the new Peter Rabbit movie at the cinema or to visit the swimming pool on site or just stay holed up in the van watching movies. As it happens the weather was poor on the Monday night and into Tuesday morning but brightened up enough for us to head out for fish and chips in Weymouth for Tuesday lunchtime. It was even nice enough to have an ice cream on the beach. There is something about having fish and chips by the seaside isn’t there? It’s a proper British thing to do and it does taste so much better, and not just because it is inevitably fresher. Our favourite place for fish and chip in Weymouth is the Marlboro as their batter is really crispy and the fish is so delicate.

Wednesday the weather was a bit more hit and miss and we debated a cinema trip but instead I insisted on visiting one of my favourite places, Lyme Regis. I don’t know what it is about Lyme that I really like but it’s just somewhere that makes me happy. We parked in the harbour car park and walked along the front to the base of the hill and high street. For C going onto the beach is what makes it a proper holiday and she loved walking along the sand picking up stones and shells for me to carry in my pockets. She has a little bowl of shells in her bedroom at home which they will be added to. It did drizzle on and off so we had to pop into a couple of shops to keep dry, but thats part of the fun on a British holiday. C is going through a phrase where she’s really obsessed with dinosaurs so we picked up some toy dinosaurs for her and some fudge for myself and J. There are some really lovely shops in Lyme where you could pick up some nice bits for the home but given that we’re about to rip our house apart I had to resist the temptation to get anything. 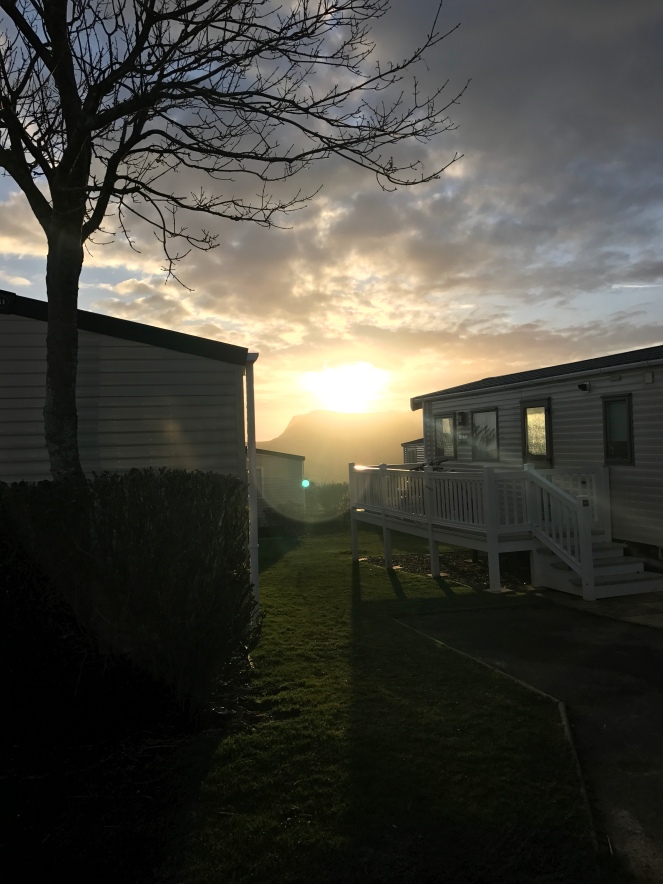 Thursday we were blessed with incredible weather for the time of year which was perfect as we had plans to meet an old friend of J’s and her two daughters in Lyme. We had some fun times playing on the beach and paddling in the sea, I let J take charge of that one and I supervised from the comfort of the towels. Even though the sun was out there was still a bit of a breeze in the air but we were able to enjoy lunch overlooking the water and then a bit of crazy golf with an incredible view. I can highly recommend the crazy golf in Lyme, even though it’s not the best course I’ve been on, it is in an incredible location. That said, crazy golf was maybe a little ambitious for the two three year olds in the group. One of which had a tantrum and C only avoided a tantrum by picking the ball up and putting it directly in front of the hole before putting it in. But providing you aren’t too fussed about keeping score it’s not too bad a way to spend an afternoon. After all that fresh air the little ones were exhausted but we still had time to try out the new soft play at Highlands End which was the perfect way to end a very busy day. 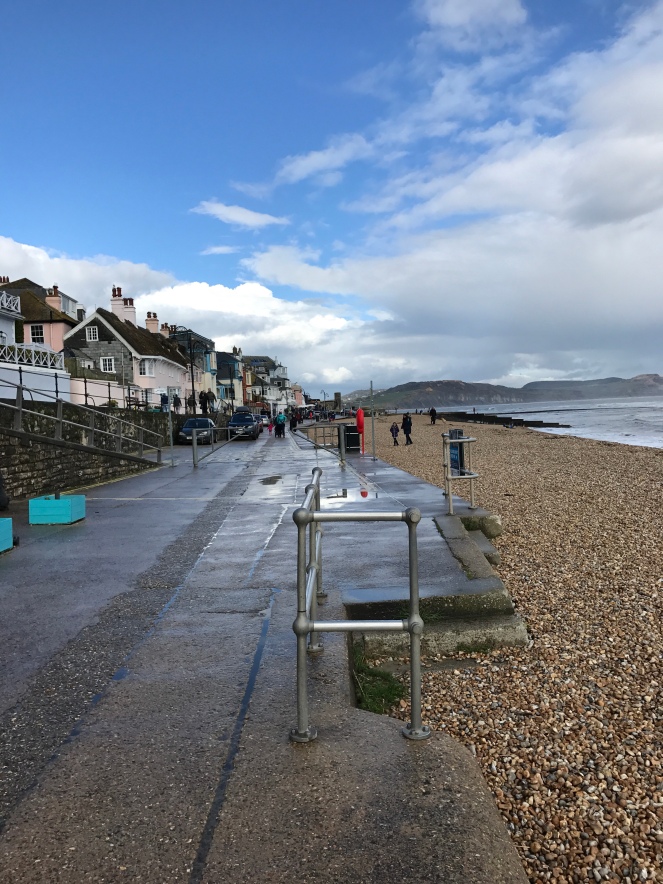 Friday was time to head home after a thoroughly enjoyable few days away. It always amazes me how a few days away can make such a difference. I feel so much more rested and relaxed and we’ve made some good family memories. C in particular was sad to come home and that was on alleviated by the promise that we could do some baking when we got home. Holiday really makes you appreciate the importance of family time and the simple pleasures that spending some time together can bring. 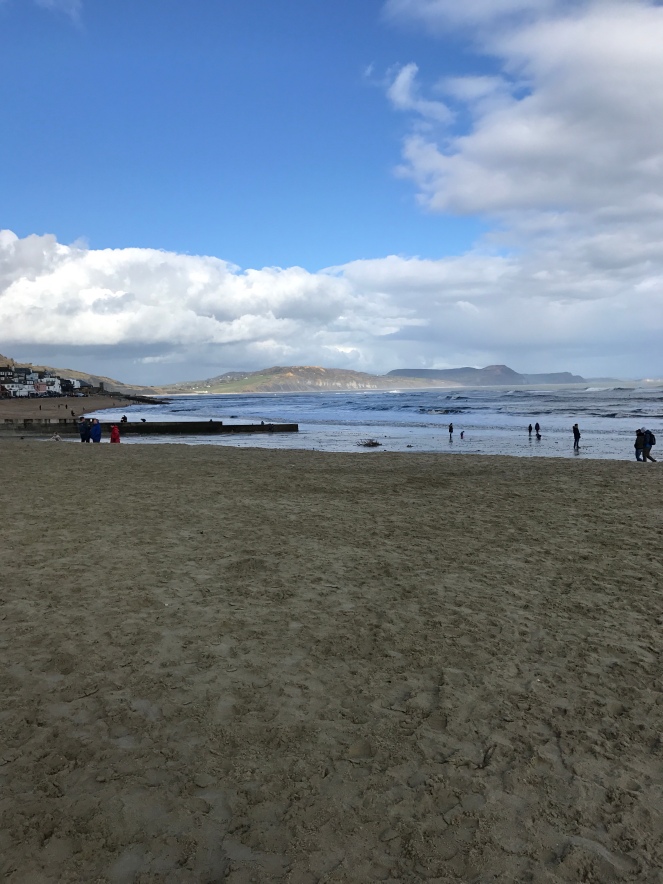 ﻿So as you know last week C and I went to stay in the family caravan in Bamburgh. It is a place that I have fond memories of from my childhood and although the area has gone through a few changes since my youth many of it’s best attractions still remain. We weren’t alone for the whole trip as we had my dad and his wife visiting for the first two nights and then my mum visiting for the next two nights. This trip I was plagued by torrential rain at the start so on our first day we went swimming in the morning at a newly built spa complex in a local village called Lucker. It is part of a bigger building project and there are a number of cottages to rent, a pub/restaurant which we ate at one night and a pizzeria. I can’t remember what the place looked like beforehand, the pub had certainly been there for some while, but the new renovation is exceptional. The pub serves high quality locally sourced food at reasonable prices. The spa complex has been built with ultimate luxury in mind. The pool is heated to a good temperature and there is a jacuzzi, steam room, sauna and waterfall showers into the pool. There are also loungers on the side and a gym upstairs (although we didn’t try this out). There is also an extensive range of treatments on offer as well as spa days. I highly recommend anyone staying in the area to check it out for a bit of relaxation and a break from the busyness that can plague seaside resorts during peak season.

During our trip we also went for fish and chips in Seahouses where C and I shared a portion of the north east’s finest. 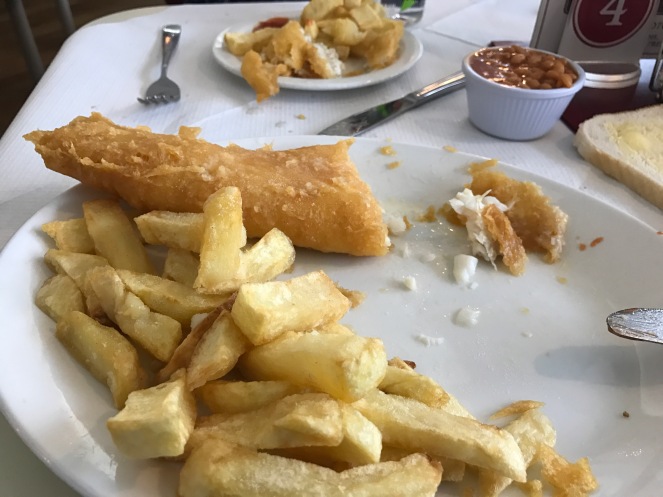 We visited our favourite bookshop in Alnwick, Barter Books and got a good selection of books which will last us a while. We also treated ourselves to lunch at their cafe where they have delicious hot and cold treats and meals with generous portions and reasonable prices.

It does look like we spent all of our time eating food. But we also did a lot of pottering around encountering a lovely toy shop in Alnwick where I managed to get a couple of games for C for her birthday. If the weather had been nicer we would have probably spent all of our time on the beach but actually it was nice to have an excuse to go shopping and eat cake. The diet starts Monday!