So although I have debated about whether to plant more things in the raised beds to try and grow them over winter, I have decided not to and to leave them empty and ready for Spring. Now there are three reasons for this. Firstly I’m looking forward to a bit of a rest from the gardening over the winter, not that there won’t be things to do but there certainly won’t be as many. Secondly, I want to make sure that I can start my planting for the summer as early as possible and don’t want to have to wait for other crops to come out. And thirdly, and possibly most importantly, I’m not a big fan of many of the crops that you can put in at this time of year. So I’ve decided to leave some of the raised beds empty for the summer. I will try to do something to build up the nutrients in the soil possible, but otherwise they will be empty. The asparagus and strawberries stay in their beds (read how they’ve been prepared for winter in a forthcoming post or two) but the pumpkin﻿ bed is currently empty as is the bed which had housed baby corn﻿ and broad beans. The other two beds should be mostly empty shortly apart from my experimental leeks which will be there through winter. But for now I’ll start with two beds. ﻿﻿﻿ 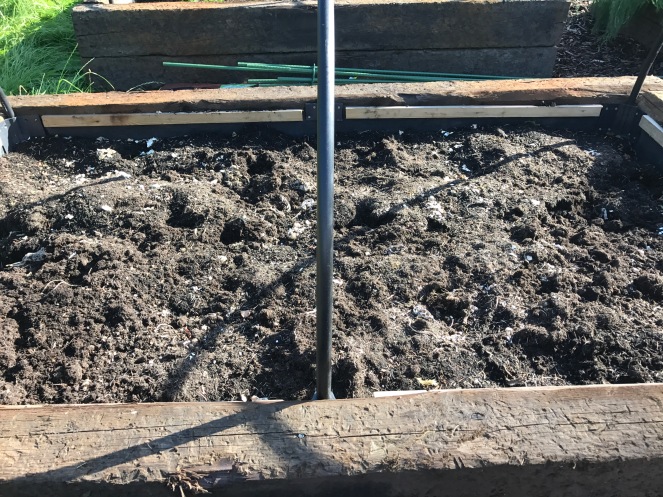 So the beds have been emptied of any plant matter including as many roots as I could pull up. I then forked them over using a hand fork so that the soil was loose. I also ensured that any weeds were removed, especially important that the roots of these are removed as well. I have decided to add some more compost in the Spring as part of my bed preparation so for now I just want to prevent any weeds growing. So what I’ve done is covered the bed with cardboard and weighted it down with left over bags of compost/grit/manure/anything lying around. Hopefully that means that at least some of the weeds are kept from appearing and it should rot down enough just to be dug into the soil in the Spring. At least that’s what I’m hoping, I guess time will tell if I’ve done enough to keep the weeds at bay. What does anyone else do to prepare their garden for the winter?﻿